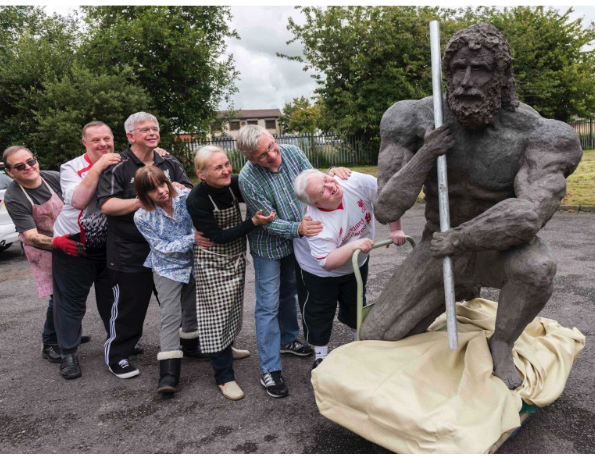 A Merseyside removal firm recently handled one of its most unusual jobs ever – transporting the Greek god of the sea across Bootle!

Knowsley-based Merseyside Movers and Storers were offering a helping hand to New Creations, an art and craft workshop run by one of Sefton’s leading adult social care providers, New Directions.

Several years ago the New Creations team created the sculpture of the Greek god Poseidon as the centrepiece of the New Directions ‘Lost City of Atlantis’ show garden at Southport Flower Show.

After the show, Poseidon took up residence at the New Creations HQ in Netherton, where he became a firm favourite with staff and people who are supported by the service.

However, when a move to new premises was arranged recently, because of the size and weight of the sculpture the team thought they might have to leave Poseidon behind or, worse still, break him up.

That’s when Merseyside Movers and Storers stepped in to offer their services to transport the VIP guest, who is also god of earthquakes, storms and horses, and widely regarded as one of the most bad tempered and moody Greek deities.

Fortunately Poseidon now has a new home in the – admittedly not very Greek-like – surroundings of the grounds of Bootle Resource Centre on Linacre Lane in Bootle.

John Owen from Merseyside Movers and Storers commented: “We were delighted to help the team at New Creations, and to ensure that the sculpture reached its new home safely.

“We specialise in handing bulky and oversize items like pianos and safes so we’re well used to this type of job, but this was certainly the first Greek god we’ve been asked to move!”

“Poseidon showcases the skills that have been developed at New Creations over the years and our aim now is to renovate the gardens with the sculpture as a centrepiece.”