Kind-hearted staff who work at the south Sefton base of a leading adult social care provider have been aiming high with their latest fundraising exercise.

Six members of the team at the New Directions South Hub on Park Lane in Netherton successfully completed a Snowdon sponsored climb in support of the many green-fingered users of the service.

The money they collect will help to pay for new raised beds in the South Hub garden, as well as a new structure that will provide shelter for people working in the garden during warm weather.

The ‘Snowdon six’ hope to collect around £700 for their efforts, and are delighted at a pledge from New Directions Managing Director Mark Fox that the organisation will match whatever they raise, pound for pound.

Gaynor O’Connell admits that some team members were rather apprehensive about the climb, as they had never attempted anything like it before.

At 3,560 feet above sea level Snowdon is of course the highest mountain in Wales, and the highest point in the British Isles outside the Scottish Highlands.

However, by working together and supporting each other the team completed the task in a very respectable seven hours, four and a half of them going up followed by a two-and-a-half-hour descent.

Gaynor commented: “We’re delighted that the climb was a success and would like to thank everyone who has sponsored us for their generosity.

“The South Hub garden is very popular with people who use our services, and I know they will get such a lot of pleasure out of the new facilities this money will help to provide.”

New Directions Managing Director, Mark Fox, said: “We’re delighted to be able to support these members of our South Hub team.  They deserve a huge amount of credit for the time and effort they’ve put into this challenging fundraising exercise.” 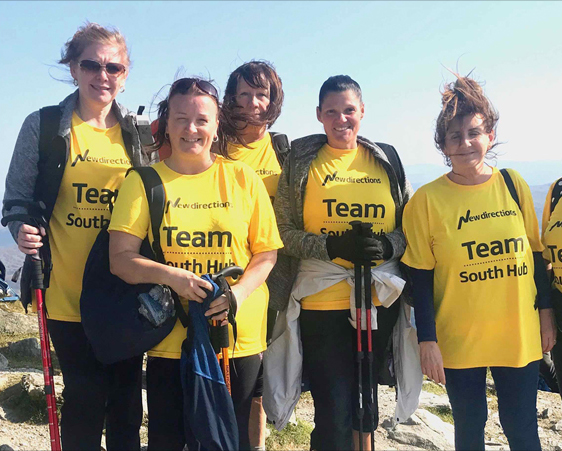